he first set of 200 cards are almost here with the last 25 cards being released in the next update. Along with it are various balance changes to level the playing field for all classes. The update is available for prview and testing on the Test server so check out the new cards for yourself today! 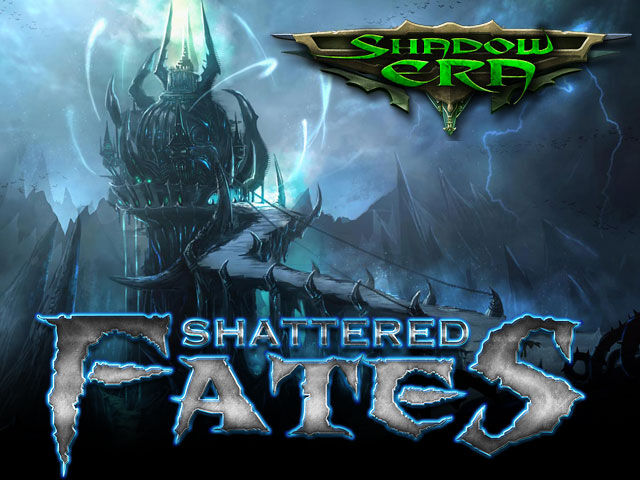 That's right, the upcoming expansion Shattered Fates is now on Kickstarter and here's your chance to get in on some great bonuses for the next set! But not only that, we're asking for your help to take Shadow Era to the next level and live up to its full potential!

Be sure to see the most epic Kickstarter video ever made, as well as read all about our crowdfunding campaign on the Kickstarter page!

Now that we’ve started spoiling cards from various sections of the set, the keenest amongst you are probably already trying to work out the breakdown of the set. Well, guess no longer, because here it is!

I doubt that comes as a surprise because it’s pretty much the same as Call of the Cystals, which has, by and large, served us well. The main departure, as you can see, is that we have 10 fewer heroes and we have 5 extra allies per faction.

This decision to have more allies in the 200 card set was based primarily on our aim to give our limited formats the best chance of success. Call of the Crystals, which was not designed with limited play in mind, had only had 43 allies in total, with only 17 of them being Common, 18 Uncommon and 8 Rare/Epic. In formats where your deck-building pool is determined by contents of booster packs, this translated to quite low ally counts compared to what you might see in constructed decks.

With this in mind, Shattered Fates has over 70 ally slots in total (there are at least 2 allies per class), with about 30 being Common and 20 Uncommon. Since the set is the same size as CotC and the number of Commons will be roughly the same, that translates to about six more allies per four booster packs, which should lead to much better experiences with the Meltdown format and booster drafts.

But we didn’t stop there! We also recognized the need for some Common weapons and armor (previously not done before in Shadow Era), to ensure that heroes that depend on them have more chance of being viable in limited formats.

But we didn’t stop there either! We made those Common weapons and armor fully Neutral (i.e. without any class restrictions), so that all of them are usable whichever hero you pick, which, again, gives each player a better chance of getting cards of that type in a limited format.

In terms of constructed play, this innovation addresses an issue that Shadow Era has had since its beginnings: certain heroes are cheaper to build viable decks with, which constrains the hero choices new players on a budget can make.

More specifically, when you first create your account in the digital game, there are a few Human hero choices that are more difficult to create decks for at the moment unless you are prepared to buy some booster packs and seek out some weapons for heroes like Amber and Gwen, who can't use their hero ability otherwise. Similarly, in the physical format, your chance of being able to build a variety of cheap decks is reduced.

When Shattered Fates hits, however, it will be just as easy to build a decent Gwenneth Truesight deck with a few hundred Shadow Crystals as it is to build a decent Eladwen Frostmire one. This should lead to a better spread of heroes being used on Quick Match, leading to a wider variety of experiences there, and ultimately a more enjoyable game for all. Which is what this is all about!

For the next month we'll be gradually spoiling new cards from Shattered Fates! 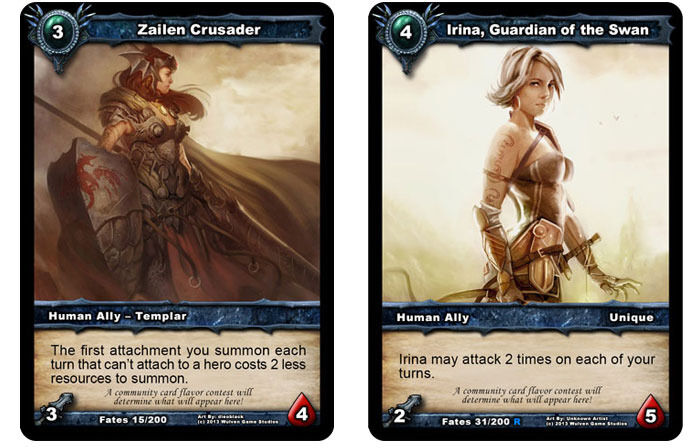 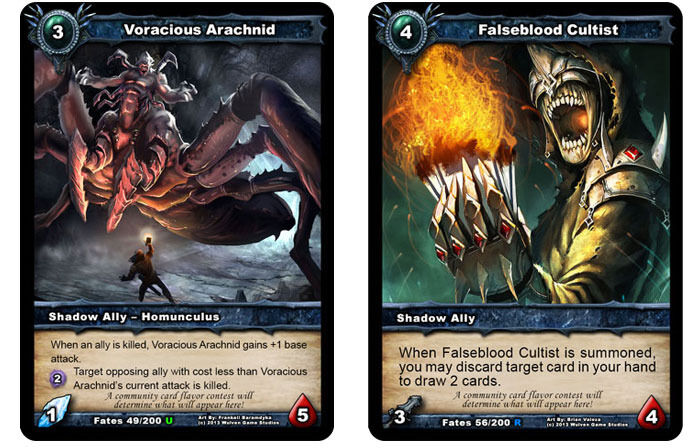 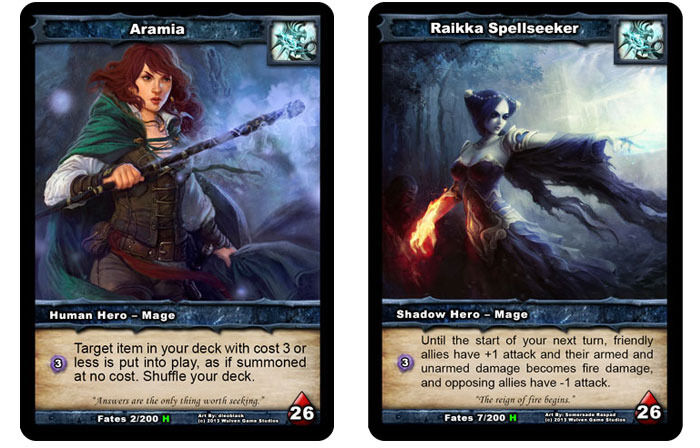 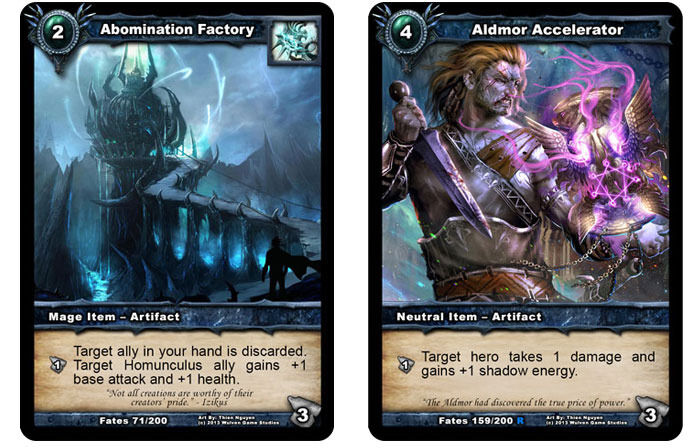 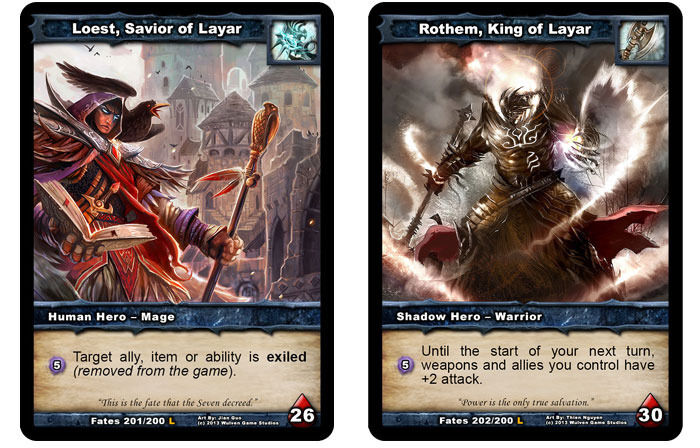 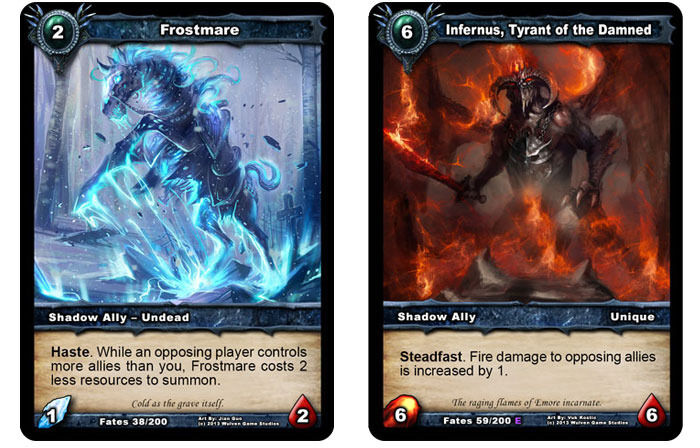 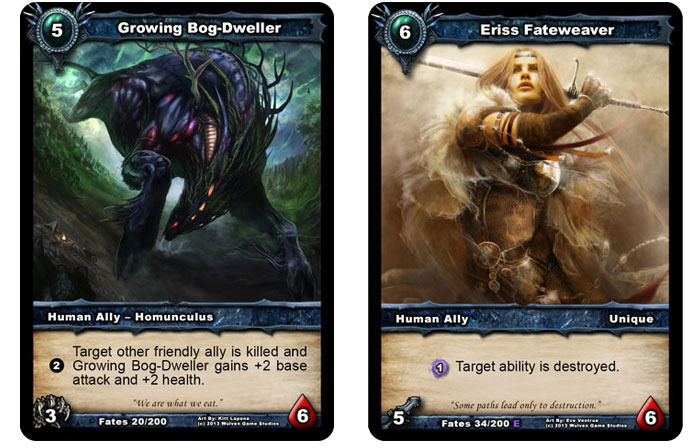 Retrieved from "https://shadowera.fandom.com/wiki/Upcoming_Cards?oldid=6355"
Community content is available under CC-BY-SA unless otherwise noted.